From Utilitarian to Experiential — The Workplace Finds New Meaning

The session, titled “Maximum Flex: Real estate becomes dynamic, frictionless and healthy” explored how the proven productivity of remote work amidst the pandemic is reshaping the workplace and highlighted its future as ubiquitous, prompting a renewed discussion on the meaning of physical office space. 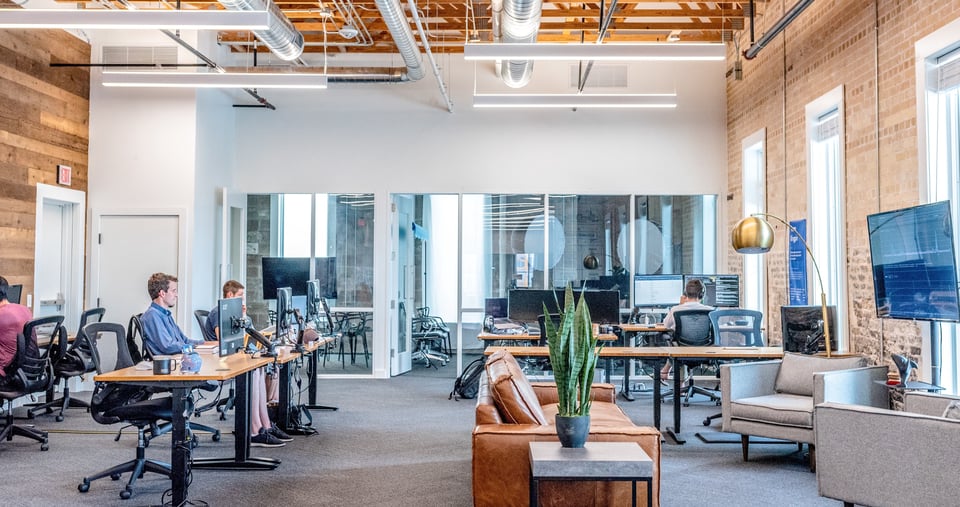 The office is dead, long live the office

Over the past few months, the pandemic-prompted work-from-home experiment has confirmed that, despite previous skepticism, employees may be just as productive working from home, if not more so — maximum flex now means maximum productivity. According to McKinsey research, eighty percent of those surveyed stated that they enjoy working from home, while forty-one percent feel more productive than they had been before. This points to an environment where employee choice will be a key driver of not only the future of work, but also where it will be done.

The MIT World Real Estate Forum session kicked off with Munn voicing the question many have in response to this situation: “Is anyone going back to an office?” Whinnery jumped into the fray with an emphatic response: “We will definitely return to the office. The question we have to ask is why.”

“We will definitely return to the office. The question we have to ask is why.” — Randy Whinnery, Fidelity

This work-from-home preference has created a new concept of workplace that exists regardless of location: a digital workplace across many spaces. As Vallee put it, “the digital workplace is now the core of the team.” Therefore, the success of the individual employee’s experience of the workplace is now even more intricately linked to the collective success of the team. Berger suggested that “ubiquitous” will be the guiding principle for the workplace moving forward. “Employees will decide which space suits their needs, he said. “It’s important to add more flexibility to the portfolio.”

The bottom line is that employees now have the choice of whether or not to come to a physical office at all, and if so, for which tasks. The ubiquitous workplace has transformed from a physical place to work into an experience of work itself that depends on the quality of the employee’s interaction with it. “The employee experience is now the primary determinant of workplace success,” declared Rondel.

This ubiquity further accelerates the employer/employee relationship toward a B2C dynamic, where employees choose their interaction with the digitized workplace and the built environment itself. Just as being ubiquitous has become the guiding principle, providing for an exemplary employee/ consumer experience has become the meaning of workplace.

This shift from a utilitarian use of the office to an experiential use will significantly impact the necessary repurposing of office space. The future of the ubiquitous workplace, then, becomes dependent on the successful shift to a B2C workplace model that cannot be fulfilled only through remote work — the physical office remains an equally important, though transformed, component.

Why is remote work insufficient, even with the rise of the ubiquitous workplace? While connectivity may be king, collaboration is key. Although isolation at home has been widely prescribed for the pandemic, its lack of tangible interaction with colleagues makes it less-than-ideal in the long run. The opportunity for managers to bring teams to flexible physical office space is likely to be a key element for reinvigorating collaboration and spontaneous interaction, both recognized drivers of productivity and growth.

The rise of the ubiquitous workplace means that there is no longer “the” office, but “an” office. Work patterns influencing employee choice of location will make collaborative space coveted in physical office space. The importance of better in-person teamwork will be reflected in the repurposing of current square footage to enhance it. Corporate headquarters, for example, may be reimagined as more attractive engagement space in the form of innovation centers and large town halls.

Changes made to current office layouts must be intentional in prioritizing the new work patterns of the ubiquitous workplace. “Workplace will be increasingly fit for purpose,” stated Rondel. “It’s not the end of workspace, it’s a more specific definition of workspace.’’

“It’s not the end of the workspace, it’s a more specific definition of workspace.’’ — Luke Rondel, Saltmine

From utilitarian to experiential: data for a meaningful shift

As a first step, many companies have digitized key workplace data, such as their portfolios and design guidelines to explore the best way to design and manage their space. Rondel’s Saltmine has worked with several customers, digitizing many millions of square feet. A feedback loop of data within the physical office will further inform how to derive the most value out of the current footprint while providing ways to monitor and improve the employee experience. This feedback loop originates from “day in the life” data gathered during employee interaction with elements of the physical office. Short surveys prompted after using a meeting space, for example, will help determine which is considered most valuable or efficient. Sensors and IoT systems in the office will play a large part in providing this data, as well. The key to making all this useful, attested Rondel, is to ensure the data gathered is transparent, accessible, and actionable.

What is the future of the workplace? Maximum flexibility is not an overstatement. If we accept that the quality of the employee experience within the ubiquitous workplace is now the primary indicator of success, it follows that employees must be offered greater diversity of choice in where and how they work.

Reimagining space is key. “It’s more about ‘how do we evolve the space we have’ instead of ‘how do we shed space’,’’ stated Whinnery. The most successful workplace of the future, then, creates a continuous dialogue in which there is space for meaning, and meaning for the space.

“It’s more about ‘how do we evolve the space we have’ instead of ‘how do we shed space’,” stated Whinnery.

Connect with the Author:

COVID-19 Revealed Serious Gaps in Corporate Real Estate Planning — How Can We Reinvent It?

Evolving workplace and workforce norms and trends have created a crucial demand for modern occupancy planning methodologies and technologies. END_OF_DOCUMENT_TOKEN_TO_BE_REPLACED